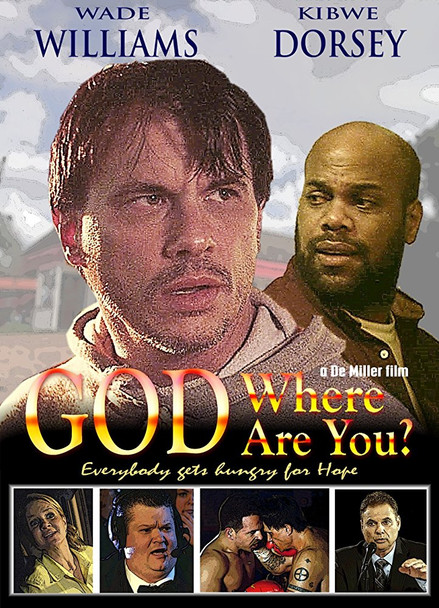 God Where Are You? - Sonnie Boones (Wade Williams ) was always a fighter working hard for everything he achieved. A two-time boxing champion of the world gave him big house, a fancy car, a beautiful fiancé, he had everything a successful man could want. His life title defense should have been the one to make his career and set him up financially for the rest of his life. Instead, the accidental death of his opponent results in the loss of his winnings and his boxing license. Worse still, he is seen as a murderer in the eyes of the public. The aftershock sends Sonny into a downward spiral in which he loses everything and rejects God and blames Him for allowing all the bad things to happen. When Sonny is at his lowest, looking for a place to sleep and scrounging for food out of a dumpster, he meets Malachi Carpenter. For all outward appearances, Malachi seems to be the night manager at an inconspicuous diner. Malachi proves to be a Good Samaritan that provides Sonny with a meal and gentle nudges on a path that Sonny never expected. Malachi gives Sonny a book called Gratitude Renewed and introduces him to a few of the diner's regular patrons. The words of a few strangers and the pages of hat book teach Sonny about acceptance and thankfulness. But is it enough to help him accept God back in his heart and save his own life? Urged to examine all of the things in his life for which he was grateful, Sonny finally ends up on the doorstep of the answer. Sonny Boone blamed God for all of his troubles and asked Why bad things happened to him> His ultimate question: God Where Are You?
View AllClose
×

How Do You Know the Bible is From God?

$10.99
How do we know that God wrote the Bible? What makes the Bible different from other books? Does the Bible have errors in it? Where did the Bible come from? Answers to these types of questions can be...
$10.99
Add to Cart Quick view

How Do You Know God is Real?

$11.99
Children are naturally inquisitive. They want to know how birds fly, why grass is green, what makes snow cold, and millions of other things. While many of their questions deal with trivial matters,...
$11.99
Add to Cart Quick view

$4.99
The Early Reader Series is made for parents to read to their young children, or for beginning readers to read to their parents. This charming little book, "God Made You" is filled with bright...
$4.99
Add to Cart Quick view

Where Is the Bear? (Lift a flap series)

$9.99
Lift the flap and help Noah find the bear he is going to feed. Children will have fun interacting with the story as they are introduced to God's love and care for them . See also Where is the Sheep,...
$9.99
Add to Cart Quick view

Where is the Coin? (Lift a flap series)

$9.99
Fun Bible Games for Kids-Interactive-Where is the coin? Bible Game. Kids Lift the flaps and help the woman find the coin she lost. This is a Girls Bible Story Book and a Boy's Bible Story Book. Both...
$9.99
Add to Cart Quick view

$29.99
This powerful series is sure to enlighten and inspire listeners with the same fire and zeal for which Archbishop Sheen is internationally known. Digitally re-mastered on 6 CDs the series contains...
$29.99
Add to Cart Quick view

Hannah Prays to God - Famous People of the Bible Board Book

$4.99
This is an outstanding Bible story book for children. Children love Children Bible stories. This is a favorite! Hannah was so sad because she didn't have any children. So she prayed and asked God to...
$4.99
Add to Cart Quick view

$12.99
Great Bible Stories-Comic Book Bible for Kids has the great Bible stories from Genesis to Revelation - in words and illustrations that children and adults today can understand and enjoy. Adam, Eve,...
$12.99
Add to Cart Quick view

$9.99
Here are great Bible stories from Genesis to Revelation - in words and illustrations that children and adults today can understand and enjoy. Adam, Eve, The Serpent, Garden of Eden, Animals, The...
$9.99
Add to Cart Quick view

Grandpa & Me: We Learn About Death

$12.99
Grand Pa and Me -We Learn About Death has won the C.S. Lewis Gold Medal for best Christian children s book in the U. S. Death and teaching children about death is not easy. This is one of the best...
$12.99
Add to Cart Quick view

$22.95
What would your church look like if members of your congregation were more likely to invite a visitor, were more satisfied with their lives or spent more time serving others in the...
$22.95
Add to Cart Quick view

$9.99
There once lived, in a sequestered part of the county of Devonshire, one Mr Godfrey Nickleby: a worthy gentleman, who, taking it into his head rather late in life that he must get married, and not...
$9.99
Add to Cart Quick view
×